When it comes to picking window shutters for a kitchen, we feel quite strongly that shutters for kitchens are the best, if not the only option out there. Kitchens usually have window sills filled with trinkets and more importantly windows close to taps. In this instance, it’s important that you have window dressings that not only function well, but are sturdy enough to stand up to all that happens in a kitchen.

Google Rating
4.9
Based on 39 reviews 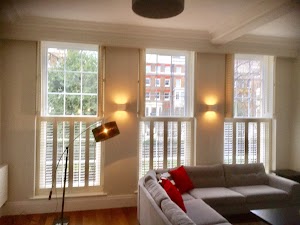 Diamond Shutters
4.9
Carol Mcdermott
13:50 21 Jul 20
Was introduced to this company via a friend so Glad we have used them. They are friendly Professional and a joy to work with, a company thatWorks with you! Thank you all .
Christopher Reed
14:19 06 Jul 20
From the knowledgeable design service to the professionalism and courtesy of the fitters Diamond Shutters have given us the perfect finish to our home. The shutters themselves are great quality and the clean design is just what we wanted. Thank you Diamond Shutters.
Donna Butler
20:47 20 May 20
I have just had my shutters delivered a installed and I must say I was very impressed with the whole process. The shutters look absolutely beautiful. I would highly recommend Diamond Shutters to anybody - they provide an excellent service and superb quality. Installation team were quick and very tidy. Thank you Diamond Shutters!
bob moore
15:15 19 May 20
I have recently had Diamond shutters install fully opening shutters to my Lounge windows. I have been impressed with the quality of the manufacture, as well as the professionalism of the installer. Left everything neat and tidy, didn't even look as if he had visited. Would definitely use this company again. 🙂
Laura Turner
11:52 07 May 20
I would highly recommend diamond shutters. Although they took longer than originally planned due to the current situation that is going on around us, the team were brilliant in keeping us informed and letting us know what was going on. They look better than I could have imagined and the real highlight for me was Danielle making sure they were in for us before our baby arrives in 2 weeks time. I can’t thank you enough and they’ve completely transformed our rooms!
Jeremy Whitlock
11:38 07 May 20
Very friendly and polite. From survey, quote to install, a great small business doing a high quality job - Thanks. Really appreciated the feedback during the lockdown whilst we were waiting for the second set of shutters.
Berna Budak
10:41 04 May 20
Amazing Quality shutters. lovely people, clean and tidy work. So so pleased with it all. Can't wait to get the second bedroom done.
See all reviewsWrite a review

Diamond Shutters
5.0
Mandy Whiffin
08:38 06 Jul 20
Thank you diamond shutters they look Beautiful. Very Happy customer and 10/10 for service and Staff!
Cheryl Kearney
20:52 01 Jun 20
Very impressed with the customer service of all staff, great quality product at an excellent price. Highly recommend.
Georgina Barrett
15:48 28 May 20
Delighted with the service we have received particularly the communication during COVID 19, shutters fitted to our tilt & turn windows today, fitters were excellent very polite with a clean & tidy installation, plus they observed social distancing at all times.
See all reviewsWrite a review
powered by Facebook
GET A FREE QUOTE

Bespoke shutters can provide a full range of light

Durable wood is easily wiped down

Kitchen shutters offer both light control and privacy, which means no more glare while cooking or washing as well as no more nosey neighbours. Now add to this the fact that they look as good as they function and it’s a no-brainer.

Finding the right kitchen window shutter will depend on a number of different factors from the size of the kitchen itself to the interior decor. You’ll also need to consider what functions are important to you. Are you looking for more privacy or perhaps more light control? Or maybe you’re simply looking for a little of both?

If your kitchen looks out onto a busy road then Cafe Style shutters are always a great option as they offer privacy at the lower half of your window while still allowing in as much light as possible through the top half. If you’re looking for the option of both with the ability to control as much of the light through your windows as possible, our Full Height shutters are a great option. Our Tier-On-Tier shutters especially give you control of both top and bottom halves separately, allowing you to block out prying eyes at the lower half as well as, as much or as little light at the top half. When it comes to the material of your window shutters, wooden shutters can of course work however if you have windows close by to taps, we advise choosing a more water repellent material such as plastic as these can prevent any warping that water could potentially cause to wooden shutters over time.

The Best Kitchen Window Shutters By The Best Team

Here at Diamond Shutters, we couldn’t be more pleased to possess one of the best teams out there. Over the 25 years that we’ve been trading, we’ve acquired not only incredible design minds but also amazing craftsmen and women who have the ability to install our window shutters to the very highest standards.

“We are really pleased with our new shutters not only have they made a fantastic difference to the Conservatory and the way we now use the room they're practicle...

Fill in the form below to get your free brochure